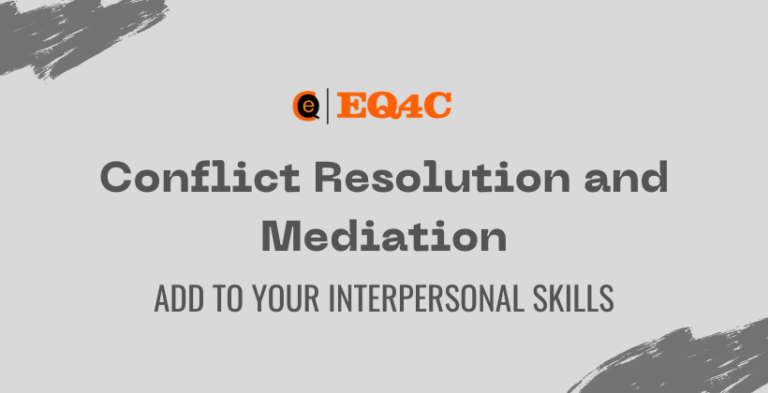 Conflict and, more specifically, the conflict between people, is part of the daily routine, especially in the context of organizational life.

It usually occurs when individuals are under stress, for instance, when significant changes are coming up or when the entire team is under pressure due to an imminent deadline.

But, conflicts can occur in relationships and other situations outside of work.

The ability to manage conflict positively and constructively, with no stress, is essential to improving your health and relationships.

The conflict between people has been described as

“An expressed struggle between at least two interdependent parties who perceive incompatible goals, scarce resources, and interference from the other party in achieving their goals”.

To clarify, this means that for a disagreement to turn into a conflict, there needs to be:

It can also be harmful, causing people to have negative feelings toward one another and wasting energy on conflicts that could be better used elsewhere. Conflict can also exacerbate the divisions and cause groups to split into either/or opinions.

However, a well-managed conflict can also be productive and help clear some air’ detaching tension and emotion. It helps to reduce pressure, especially when the parties involved see the conflict as an opportunity to improve understanding and discover ways to work together out of the conflict.

There are instances where it is crucial to communicate in challenging situations.

Although many of us prefer not to have difficult conversations, there are times when this is not always possible. For instance, a manager might need to inform someone they’ve been laid off, or a child confides with their family members that they’re struggling in school.

Before you begin to solve any issue first, you must be able to recognize its root cause and the nature of the conflict.

It is crucial to know when to leave the conflict and call someone more experienced to mediate. Although most of us won’t be asked to facilitate the event of a global conflict or even an industrial relation issue, learning the ability to intervene can be beneficial when conflicts have become more intense than it is at an average level.

The first step in resolving conflicts is to choose the strategy you’re going to employ to resolve the issue. But before you accomplish that, you must determine the reason for the conflict and, consequently, the type of conflict.

There are three primary kinds of conflict.

There are three kinds of conflicts: interpersonal or relationship conflict, instrumental conflicts, and conflicts of interest.

Conflicts between people or relationships typically revolve around self-image or identity or the most critical elements of a relationship, such as trust, loyalty, lack of confidence and perceived betrayal or disrespect.

Instrumental conflicts concern objectives, structures, and processes and refer to something tangible and a part of the organization or for an individual.

Conflicts of interest are based on how ways to achieve objectives are distributed like time or money, space, and personnel. They could also involve aspects related to these, for instance, relative importance or even knowledge and expertise. One example could be two people disagreeing on the best way to spend their bonus on a trip or fix the roof.

It is vital to stress that addressing conflict in the early stages is generally more accessible because the positions aren’t so established, other people are less likely to oppose one another, and the negative feelings aren’t as extreme. The most effective way to resolve conflict in its initial stages is to initiate negotiation among the participants.

There are five ways to deal with conflict, and we can analyze all of them by determining which side wins and who loses.

Win-win situations are always going to be the best for everyone. Therefore, it is essential to recognize that specific strategies are substantially more successful in the long run.

5 Strategies to Deal with Conflict

This is the typical win-lose situation where the power and strength of one person prevail in the battle.

It’s a valid strategy; however, anyone using it should be aware that it can cause a loss, and if the person isn’t able to find a way to voice their grievances, it can cause negative feelings. This method is ideal for situations where little or no communication is needed between the parties or groups involved.

This is the best result: a win-win situation.

But, it will require a lot of time for all parties to resolve the issues and figure out a method to address the point that all can negotiate. It can be difficult, mainly if the positions have been established and rooted in reality, but it’s most likely to provide the best beginning point in the conflict.

This could yield a better outcome than win/lose. However, it’s not a win-win. It could be referred to as a draw with no score.

Each party gives something in exchange for an agreed-upon mid-point resolution. It is an outcome that is not liked by everyone too much but will not offend or disturb any person too much. It is less time-consuming than collaboration yet will likely cause lower commitment to the result since it’s not everyone’s preferred alternative.

This is the place where everyone pretends to be in a perfect state.

This tactic is employed quite often and can prove highly efficient. It’s advantageous if people in conflict require the time to cool down before any discussion or even if the dispute is unimportant and will be resolved in time.

However, it can’t be employed if the dispute will not just end. If this is the case, this approach will result in an outcome that is a loss/win situation. It is still a bad feeling, but there won’t be any air clearing with discussions. Resulting Transactional Analysis terms, in “I’m not okay. You’re not okay. This could cause severe anxiety for those affected.

Superficially, there is harmony; however, there’s still the possibility of conflict beneath.

It’s similar to the scenario above, but one person might be comfortable with this smoothing, but the other is still at loggerheads, creating an Unwin-win situation. It is possible to work when maintaining relationships can be more valuable than resolving the current conflict. It’s not a good idea in cases where one individual or other people outside of the conflict feel the issue should be solved.

There is a variety of skills that can be useful in handling conflicts. Perhaps the most crucial is assertiveness.

It would be best to communicate your thoughts without being aggressive. One example to consider is ‘describe the circumstance so that you can express your thoughts and state the actions you would like to take.

Active listening and managing emotions are vital skills for handling any conflict. As an mediator or a party to conflict you must listen to all the parties involved before thinking of any resolution. Also, consider the emotional aspects of all the parties.

It’s also beneficial to consider what you say about the circumstance. If you are trying to discuss the impact of the conflict or behavior of the other party, it is best to use ‘I’ sentences. Also, you must be able to explain the effects of certain behavior or actions on yourself. For instance:

This is much simpler to comprehend than “Your behavior is horrible” or “You are a bad person”. This can make it easier to talk about problematic areas without causing further conflict.

It’s essential to recognize your limitations when handling conflict, whether as a direct participant or a potential mediator.

If you come to a place where you’re not sure that your intervention will be helpful, it’s okay to back off and seek help from a more experienced professional mediator. It’s much better to seek assistance than to intervene and cause more problems.

To acquire charismatic personality you must start with interpersonal communication

You can visit respective pages on – Leadership Skills, Charisma, and Assertiveness